Americans are unaware of a decline in our individual liberty, & the reason is obvious: the decline rarely takes the form of sudden deprivations but, instead, takes the form of unnoticed erosion & thus, we come to regard whatever state we are in, as a normal condition.

The European Union grew out of a desire for peace in a war-torn and divided continent. Five years after World War II ended, France and Germany came up with a plan to ensure their two countries would never go to war against each other again. The result was a deal signed by six nations to pool their coal and steel resources in 1950.

Seven years later a treaty signed in Rome created the European Economic Community (EEC) - the foundations of today's European Union. The UK was one of three new members to join in the first wave of expansion in 1973. Today the EU has 28 member states with a total population of more than 500 million.

2. Which countries belong to the EU?

The EU has grown steadily from its six founding members to 28 countries. Belgium, France, Germany, Italy, Luxembourg and the Netherlands signed up to the EEC, or Common Market in 1957. Britain, Ireland and Denmark joined in the first wave of expansion in 1973, followed by Greece in 1981 and Portugal and Spain five years later. Eastern Germany joined after unification and Austria, Finland and Sweden became part of the EU in 1995. The biggest enlargement came in 2004 when 10 new member countries joined. Romania and Bulgaria joined in 2007 and Croatia was latest to sign up in 2013.

There are four key institutions which work together to run the EU - the European Commission, the European Parliament, the European Council and the Court of Justice. Watch the video (A) to find out how they all fit together and what they do.

The UK's estimated net contribution in 2015 was ￡8.5bn - according to Treasury figures. Each country receives money back from the EU to support development and other projects. The UK also gets a rebate, or money back, on its contribution, because much of the budget is spent on agricultural subsidies and the UK does not gain nearly as much as other countries like France. After all repayments were taken into account in 2015, Britain contributed about 12.6% of the entire EU budget. Germany paid the largest share, 21.36% and France was the second-biggest contributor at 15.72%.

5. How does the EU spend its money?

The EEC started out as a trading bloc - with free movement of goods and services within the Common Market - now its interests include reducing regional inequalities, preserving the environment, promoting human rights and investing in education and research. 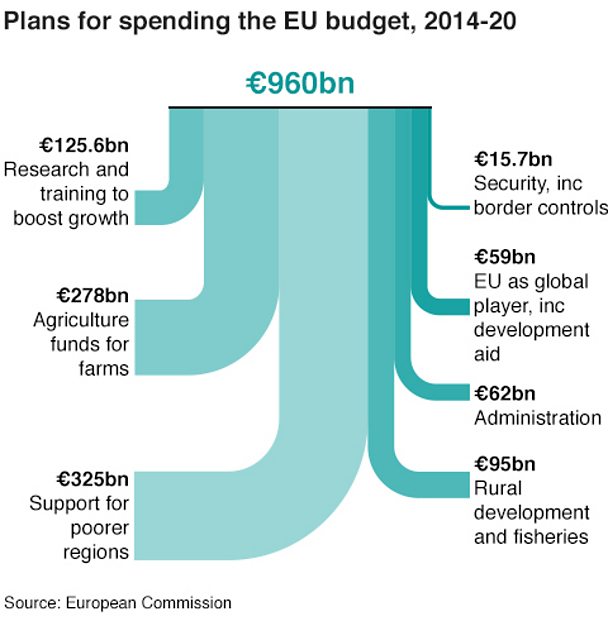 The EU is Britain's biggest trading partner. British citizens are free to work in any EU country and EU funding is spent on supporting farmers, boosting jobs in the UK, redeveloping rundown areas, and grants for university research. The EU has contributed to cheaper travel by challenging monopolies and boosting competition. It has reduced the cost of mobile data roaming and set water quality standards in Europe.

But giving subsidies to farmers led to over-supply of some crops and so the EU was forced to rethink its agriculture policy. Critics say the EU has taken too much power from the UK government, its regulations are costly to the British economy and without them, Britain would be able to sign other trade deals with growing economies like China and India. They also say that the EU wastes taxpayers' money on excessive bureaucracy - citing MEPs monthly trips to Strasbourg which cost 180m euros (￡136m) per year.

UK and the EU: Better off out or in?

6. Why is there a referendum?

The British government has promised to hold a referendum on EU membership before the end of 2017. There have been growing calls for a vote on whether to stay or leave the union, as it has grown and become more powerful.

In the past, the UK has chosen to opt out of some key EU decisions, like the single currency or euro and the Schengen Treaty, which relaxed border controls. Prime Minister David Cameron wants Britain to stay in the EU, if certain changes are made to the rules - including lower benefits paid to migrants and greater protection for states not in the eurozone.

Critics believe Britain is being held back by the EU, gets little in return for the money it pays in and would be better taking back control of its borders.

The UK's EU vote: All you need to know

EU: Better off in or out?

EU referendum: What you need to know

What Britain wants from Europe

(A) How the EU works: Guide in videos