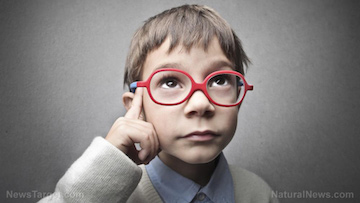 In a big country that allows corporations to run the regulatory agencies, there’s not much room for ethics, because it’s all about the money. The massive U.S. food and medicine industries are dominated by a handful of monopolistic businesses that make billions off consumer ignorance, and that’s just a cold hard fact. Nearly all conventional food and allopathic medicine is highly corrupted with chemicals that propagate disease and disorder, so the corporations that manufacture and process them in laboratories must trick and confuse the consumers with language and slogans that sound “warm and fuzzy.”

If you don’t eat organic food and seek natural remedies, you’re most likely in for a world of hurt. American consumers, for the most part, live in a fog, with their IQ’s dumbed-down by fluoridated water and their bodies polluted with pesticides and heavy metal toxins that feed their chronic inflammation, which fuels disease and disorder.
If you watch television, read the newspaper, or like those magazines near the checkout registers at the store, you’ve most likely repeatedly encountered the most deceptive marketing tricks by Big Food and Big Pharma. After all, repeat a lie enough times, no matter how stupid it sounds, and the masses start believing it.

Popular corporate jargon for a world of dumbed-down consumption:

#1. “Generally Recognized As Safe” (GRAS) – The FDA’s stamp of approval slogan that means the ingredient is highly dangerous to human health but the FDA refuses to run any tests knowing the results will cause the products containing it to be recalled.

#2. “Safe and Effective” – The official CDC stamp of approval for every vaccine and flu shot that has never been proven in a clinical trial to work, and which comes with a list of adverse events and side effects on the vaccine insert that should make any sane, intelligent human avoid it at all costs.

#3. “Ask your doctor if (insert nifty-sounding pharma drug name) is right for you” – Pharma’s rhetorical question at the end of every televised commercial for every dangerous, experimental drug. This is meant to cancel out any thoughts that are still lingering in the viewer’s brain about the horrendous side effects they just covered, like internal bleeding, loss of vision, and suicidal thoughts.

#4. “Sustainable” and “Improves Yield” – Normally, these terms are positive and fruitful, but as far as Biotechnology corporations and the Chemical-Industrial-Agricultural-Complex goes, the use of these terms means the exact opposite, because using chemicals on crops is not sustainable for the soil or the animals that eat the crops, and since superweeds and superbugs become resistant to GM crops over time, the yield claim is completely false.

#5. “As a Preservative” or “For Added Freshness” – These terms mean cancer-causing chemicals and dementia-inducing GMOs have been added to foods or beverages to stave off mold, fungus, or bacteria (think of sodium benzoate and canola oil).

#6. “*This statement has not been evaluated by the Food and Drug Administration” – The FDA’s favorite way to let you know that a natural supplement that heals or prevents disease or disorder will never be allowed to be proven as such and stated on the label, because that would dip into Big Pharma’s prescription drug profits.
#7. “Use as directed” or “Safe only when taken as directed” – Most pharma drugs are not safe at all to begin with, plus they are often cross-prescribed for conditions and disorders never even tested for or proven to help with during clinical trials. More than 100,000 Americans die every year from prescription drugs that are “taken as directed.”

Most Americans believe the CDC, FDA, and the EPA are looking out for our “better interest,” but nothing could be further from the truth

Just like Monsanto creates crops and produce that contain cancer-causing chemicals, and just like Merck manufactures vaccines that contain known carcinogens and neurotoxins, the regulatory agencies are corrupt to the core, but they have to at least seem like they’re doing their job to protect us and keep us out of harm’s way.

They only way to live without disease and disorder is to continually educate yourself about clean food, pure water and natural medicine. Thankfully, there are some scientists (like the Health Ranger) and doctors (like Naturopathic Physicians) who are looking out for us. Check out NaturalPedia.com for Nature’s solutions to modern health and organic lifestyles.