"Don't fight a battle if you don't gain anything by winning."  Erwin Rommel

“THIS IS ONE OF THE MOST DANGEROUS EMOTIONS YOU COULD ENTERTAIN” 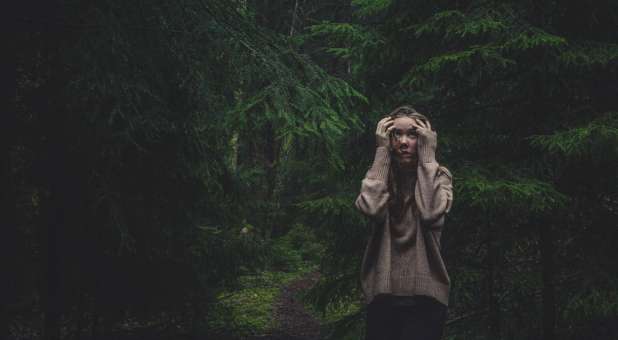   (Photo by Maia Habegger on Unsplash)

When I was a little girl, my parents bought Bible storybooks for my sister and me. I can vividly remember the depiction of Jesus in the boat on the Sea of Galilee as the storm arose and threatened the lives of all aboard. When the disciples woke Him, Jesus stood up in the boat and with only a word calmed the wind and the waves. Then He looked at His disciples and said, "Why were you afraid? Why were you afraid when I was with you?" (See Mark 4:36-41).

Indeed, why are we afraid when He is with us?

In the Bible we are told "fear not" or "be not afraid" nearly 100 times. God must have known fear would be a problem for us. He knows we are human beings, and fear is one of those emotions that seems to arise unbidden. It feels out of our control, but if God asks us not to be afraid, He must also know that getting there is something we can accomplish.
Fear is frequently a bedrock emotion underlying worry and anxiety. You can't fight fear simply by trying harder to not be afraid. The space that emotion occupies in your soul needs to be refilled with something stronger, something deeper, something more encompassing. And we'll find that in God's Word.

You may have heard sermons about overcoming fear based on Job 3:25: "For the thing which I greatly feared has happened to me, and that which I dreaded has come to me." Some have interpreted this to mean that if you are afraid of something, your fear will cause that thing to happen. That belief may have stirred up even more fear in your heart: "I'm not afraid. I'm not afraid! I'm not afraid!" God is not asking you to work yourself into a frenzy trying to not be afraid. There's a bigger picture of what the Bible says about fear that you need to understand.

The initial emotion of fear is not the problem; however, when you park there and let fear continue to have control, you suffer a negative impact on your well-being and dishonor God. Remember, you can't get rid of darkness by trying to push it out; you must turn on the light.

One of God's own went from fearful to fearless. When Jesus first called Peter to follow Him, Peter was an uneducated fisherman, accustomed to a hard life. During the three years he spent as Jesus' disciple and constant companion, Peter's mouth and impetuous spirit sometimes got him into trouble. Then, when Jesus was on trial just before His crucifixion, Peter denied Him three times. (See John 18:15-27). We know that story, and like Peter, we may either say, "I'll never deny Him," or live in fear that we might.
Did Peter have another option besides denying Jesus that night? Of course! But appreciate for a moment the very human fear going through his mind. I doubt you've felt any more afraid than Peter did that day.

But just a few weeks later everything about Peter was different. He and John ministered healing to the lame man at the temple gate. A crowd gathered in amazement, and Peter was soon speaking to them all about Jesus—apparently not caring what anyone thought (Acts 3:10-11). When Peter and John were soon arrested and called to stand before the authorities, Peter held nothing back. Even the authorities were surprised. "When they saw the boldness of Peter and John and perceived that they were illiterate and uneducated men, they marveled. And they recognized that they had been with Jesus" (Acts 4:13).

How did Peter get there? It wasn't by trying harder. It was through spending time with Jesus, seeing Him alive after His resurrection and experiencing the Holy Spirit's presence. (See John 21:15; Acts 2:14-18) It can be the same for you.