"You must stick to your conviction, but be ready to abandon your assumptions."  Denis Waitley

“THE GRIM ROAD AHEAD: A FUTURE ‘THE JETSONS’ DIDN’T FORESEE” 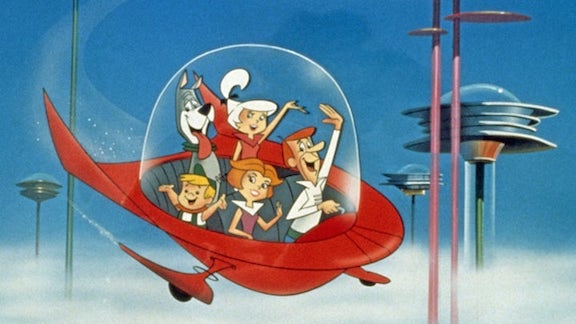 Pop-culture imaginings of the future typically involve fun gadgets and advanced technology, but what will we lose on the way there?

I met George Jetson and his family in the 1990s through television reruns.

In my childhood summers, I spent days watching Cartoon Network’s Boomerang channel, which featured cartoons of yesteryear. The Jetsons, a classic that made its debut in the early 1960s, imagined life for the American family around the year 2062. While the nuclear family dynamics remained the same, flying cars, robotic maids, and gravity-defying infrastructure became reality rather than just imagination.

We’re just 44 years away from the setting of the Jetsons, but I’m not sure we’re on track to reach Hanna-Barbera’s futuristic dream—though it’s not totally out of the question. Regardless, getting to that future is a bit more convoluted and potentially dangerous than the show suggests.
It may sound far-fetched, but we’re living in a burgeoning futuristic world that could become something akin to The Jetsons relatively soon. We have so many innovations that already mimic aspects of The Jetsons’ world, from smartphones to artificial intelligence to early versions of driverless cars. But alongside these advancements have come declines to the environment and—for better or worse—notable changes to our everyday lives. When I was a kid my local shopping centers were booming with Sam’s Clubs, Toys ‘R’ Us, and Kohl’s stores.

The rise of e-commerce reimagined shopping, the checkout counter just one click away. It’s convenient sure, but we’ve lost something valuable. The American mall is part of our cultural identity as a right of passage for teens getting their first jobs or going out without their parents for the first time.

Perhaps in the grand scheme of things, that’s a minor sacrifice in the name of progress—whatever that means. Every generation sees portions of their childhood become relegated to nostalgia for days gone by and that’s fine. Hollowed-out Toys ‘R’ Us stores aren’t a huge issue, but a Black Mirror-esque society where advancements in areas like social media alter our human connections and the destruction of our physical ecosystem are. And millennials, who are often labeled as entitled and lazy, will have to find the solutions—particularly around issues like climate change.

We’re already seeing the relatively small changes, but they’re only going to get bigger if we don’t make changes. When I was a kid growing up in New Jersey, we had four fairly strict seasons. Now I see random 80-degree days in February and snow in April almost regularly. Ten years ago we had blizzards—now we have bomb cyclones and polar vortexes.

Maybe seasons seem trivial, but they have an impact on so many other things. Consider the losses if bees alone went extinct—many of the fruits and vegetables we love and rely on, even coffee production would be affected. We know what our oceans look like now with around 8 million tons of plastic polluting the waters every year and by 2050 enough plastic to outnumber fish. Whales, full of plastic bags are washing ashore.
Right now, the road to our future feels more Wall-E and less Jetsons. The 2008 Pixar movie focuses on a robot assigned to clean up the now unlivable Earth in 2805 and focuses on all the ugly factors of human development. Humans in the movie live on a cruise ship orbiting through space because Earth is so polluted it can’t sustain life. The movie doesn’t chronicle how humanity and Earth ended up in such a dire situation but it’s not hard to figure it out. Maybe we won’t get there, but Wall-E offers a kind of realistic imagining of what our future might look like—and that’s if we can also create a habitable space cruise ship to sustain the human race. Though I’m sure Elon Musk would be up for the task.

Maybe we won’t get there. Major companies like Adidas and Starbucks are making commitments to reduce their pollution contributions while organizations like Environmental Defense Fund and The Nature Conservancy continue to fight climate change and protect natural resources.

It’s fun to think about all the cool things we could have in the future—especially if we end up in a happy kind of utopia like The Jetsons. But in order to get there we need to understand that life as we know it will change in every aspect, and we should consider what that means. Hold tight to the things you don’t want to lose—whether it’s your local mall or your humanity—and find a place for them in your future.