"Having a conscience now is a grief-soaked proposition."  Stephen Jenkinson

“WHAT'S NEXT FOR THE CENTRAL AMERICAN MIGRANT CARAVAN?”

By Amanda Holpuch
Source: The Guardian 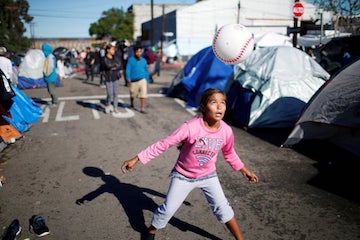 While some have returned home, many members seek a better life as they seek local jobs and await word from US authorities

A migrant, part of a caravan of thousands from Central America trying to reach the US, plays with a ball as she shelters on the street in Tijuana. Photograph: Mohammed Salem/Reuters

While some have returned home, many members seek a better life as they seek local jobs and await word from US authorities

Inside the Tijuana migrant shelter that has become a home for thousands of Central American migrants, 55-year-old Carlos Gómez approached some strangers asking if they knew where he could find a job.

Gómez was one of thousands who fled Honduras with the migrant caravan that arrived in Tijuana one month ago. He would still like to seek asylum in the US, but with thousands of people ahead of him in the line to submit an application, he would be content to stay in Mexico, he says.

“I need the work, I don’t want to go back to Honduras,” said Gómez in El Barretal’s enormous open courtyard, where the few spaces not occupied by tents are filled with lines of people waiting to receive donated sandwiches and piles of warm winter clothes.

Despite the open hostility of Donald Trump, most members of the recent migrant caravans headed north in the belief – fed by rumors and often bolstered by their deep Christian faith – that they would quickly be granted asylum.

Now, after a cold welcome in Tijuana – where they have faced xenophobic reactions from local people and been teargassed by US border officials – some migrants have chosen to head home.

But most have remained in Tijuana, intent on building a life more tenable than one defined by the violence and unrest back home.

Gómez made the 2,000-mile journey to Mexico alone, after his family was forced off their property and targeted by gangs. “I couldn’t live in that country anymore,” he said.

He accepted the Mexican government’s offer to provide work permits to the migrants but said he had been waiting two weeks for his application to be processed.

Until that happens, Gómez – along with thousands of others – remains at Barretal, a concert hall turned refugee camp. The migrants were transferred here last week after a previous facility – a sports center – was flooded during torrential rains and health workers warned of dangerous, unsanitary conditions.

In Barretal’s multi-story indoor facility, children’s chatter bounces off the walls endlessly as kids stampede down staircases and through corridors, turning any structure, including the music venue bar, into a playground.

Adults hold hushed conversations, rustle through backpacks and suitcases to find a certain shirt or hat and empty plastic bags of donated bathroom supplies to examine on their blankets.

Denis, 31, said the only quiet in the camp came late at night.

He traveled alone from Guatemala, planning to seek asylum in the US, where his mother became a citizen several years ago. Denis said she applied for him to join her more than two years ago, but he does not know what has been happening with the application and is skeptical her attorney will actually help him. He asked that his name not be used so his chances of getting to the US wouldn’t be jeopardized.

“I could be close to getting papers, but if I cross I could be close to ruining it,” Denis said. “There’s a lot uncertainty.” According to Denis, El Barretal is a better place to figure out his next move than the unsanitary conditions at the sports stadium.

But in exchange for improved sanitation, space and shelter, migrants were forced to accept being much farther from the border. The location is about 11 miles from the San Ysidro port of entry, where asylum seekers manage an unofficial, handwritten list to determine who is next in the line to apply for asylum in the US.

Pat Murphy, a priest at Tijuana’s oldest migrant shelter, la Casa del Migrante, said the newest Central American arrivals did not seem to have realized just how long it could take just to apply for asylum and what would be likely to follow: prolonged detention in US custody.

Murphy has for five years welcomed migrants from Central America, Africa and the Middle East to the hillside shelter. It’s a hopeful, bustling place, where residents and staff rotate cleaning duties and follow a strict schedule for family meals and activity time.

Once migrants learn that the waiting time can be months, and that the threshold for being granted asylum is high and will probably include a period in detention, many soon decide to stay in Mexico or return home.

“Maybe your American dream has to become your Mexican dream – and that’s not so bad,” Murphy said.

Government and trade groups have said at least 7,000 jobs are available for this batch of migrants, though wages are typically low and the migrant workforce is vulnerable to exploitation.

There is also a cautious optimism about what that life could look like for migrants following the inauguration of Mexico’s new president, Andrés Manuel López Obrador, known as Amlo.

Amlo has yet to unveil his government’s policy on migration, but activists in Tijuana were encouraged when, on the day he took office, members of his transition team visited the city. Murphy said Amlo’s representatives told him they were there to listen because the president wanted facts about the crisis.

Murphy said the government of Enrique Peña Nieto, Amlo’s predecessor, had never sent a representative to the shelter. “That’s a hopeful sign, we’ll see what comes out of it,” Murphy said.

Meanwhile, migrants still flee towards the US, which has responded by deploying more than 5,000 troops to the border and employing a controversial tactic that limits how many people can seek asylum each day called metering.

With metering in place at San Ysidro, observers say less than 100 people are permitted to seek asylum on an average day – often it’s about 40 to 60.

Michelle Brané, director of the Migrant Rights and Justice program at the Women’s Refugee Commission, said it was “absurd” how few people the US is allowing in.

“People are going to start dying because we are creating this backlog,” she said. “The US government is making no effort, and this they have acknowledged. There is no plan in place to increase capacity for processing people. They are not even trying to do that.”