But the tongue can no man tame; it is an unruly evil, full of deadly poison. Therewith bless we God, even the Father; & therewith curse we men, which are made after the similitude of God. 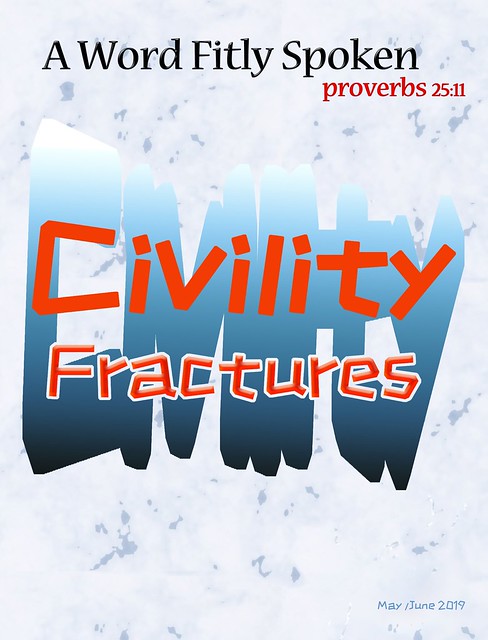 Across the US young people are reporting more depression. Rates of depression have skyrocketed among kids, teens, and young adults under 25. Experts say these young people are at serious risk of long-term mental-health issues, and more could be done to help them. Depression rates in the US are soaring ...

“WHERE'S THE CIVILITY IN AMERICA? HOW RUDE BEHAVIOR IS CONTAGIOUS”


“HOW THE MEDIA USE LOADED LANGUAGE TO MISLEAD & MANIPULATE”

This is part of an ongoing series on how the left uses loaded language to distort reality and shape our thinking. It’s also an effort to describe the unspoken assumptions which underlie these clichés. Democratic Socialism – Based on the principle that theft is okay if a majority votes to steal your money ...

The words of a wise man's mouth are gracious; but the lips of a fool will swallow up himself.
Ecclesiastes 10:12


“VENEZUELA'S COLLAPSE COULD HAPPEN IN THE USA”


“THE COST OF INCIVILITY IN THE WORKPLACE”

The modern workplace may be finally undergoing a period of self-reflection as the demand for better and more civil working environments is moving to the forefront. This demand is not new. Employees have always framed the majority of reports made to ethics and compliance hotlines as issues of respect and fair treatment ... 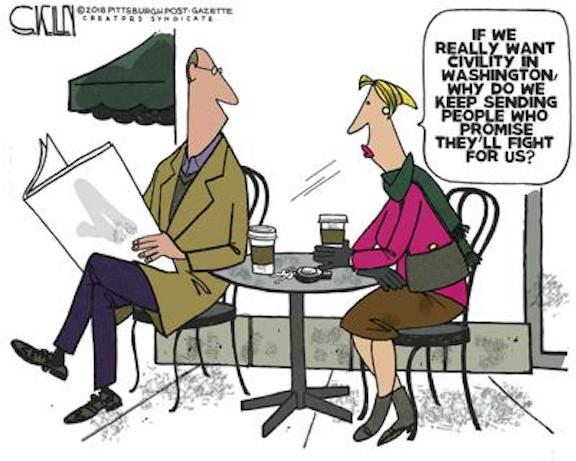 “I CRY WHEN I THINK BACK HOW THINGS USED TO BE - WHAT IN THE WORLD HAS HAPPENED TO THE AMERICA WE GREW UP IN?”

Earlier today, my attention was directed to a thread on an Internet discussion forum that lamented how much America had changed over the years. I don’t know exactly why, but the posts on that thread really touched me. Those of us that are old enough to remember what America was like before the Internet grew up in a much simpler time. Yes, we didn’t have all of the luxuries that we take for granted in 2019, but we found joy in the simple things and people were generally much happier. Today, we seemingly have so much going for us, and yet people are lonelier, more disconnected and more depressed than ever before ...

“IS CIVIL DISOBEDIENCE EVER JUSTIFIED?”

What is Civil Disobedience? Civil disobedience is defined as “a public, non-violent and conscientious breach of law undertaken with the aim of bringing about a change in laws or government policies. On this account, the persons who practice civil disobedience are willing to accept the legal consequences of their actions, as this shows their fidelity to the rule of law ...

The quiet words of the wise are more to be heeded than the shouts of a ruler of fools.
Ecclesiastes 9:17


“IN THESE DIVIDED TIMES, IS CIVILITY UNDER SIEGE?”

It's a time of deepening political divisions in the United States, with people on opposite ends of the political spectrum not only disagreeing but many really disliking the other side. That dislike has been growing for decades. In the midst of all that division and dislike, there are growing calls for civility. One poll shows that a majority of Americans say incivility is a major problem. And an NPR/PBS NewsHour/Marist poll says that the country's civility crisis is deepening and that a majority of Americans fear it will lead to violence ...


“HOW DO WE PRY APART THE TRUE & COMPELLING FROM THE FALSE & TOXIC?”

When false and malicious speech roils the body politic, when racism and violence surge, the right and role of freedom of speech in society comes into crisis. People rightly begin to wonder what are the limits, what should be the rules. It is a complicated issue, and resolving it requires care about the exact problems targeted and solutions proposed. Otherwise the risk to free speech is real ...

Wherefore, my beloved brethren, let every man be swift to hear, slow to speak, slow to wrath:
James 1:19

He answered & said unto them, Well hath Esaias prophesied of you hypocrites, as it is written, This people honoureth me with their lips, but their heart is far from me.
Mark 7:6


“5 REASONS WHY THE JAPANESE ARE SO POLITE”
“THE MEANING OF PAUL MCCARTNEY’S “WHO CARES”: IT’S ABOUT MK ULTRA”

In the music video “Who Cares”, Paul McCartney plays the role of a “behavioral hypnotist” who treats a confused Emma Stone. The intense symbolism of the video hints to a darker practice: MK ULTRA and Monarch Mind Control ...

Have you ever wondered why most church services in America seem to be filled with lots of fluff and very little substance? As America’s moral foundations literally collapse right in front of our eyes, a large percentage of our pastors are afraid to speak out about controversial topics because they might offend someone. And it doesn’t take a genius to figure out why they are so afraid. Most U.S. churches are shrinking, and more than 100 die every week. In a day and age where pastors are judged by attendance numbers and budget levels, scaring people away is bad for business ...

“EVIL HAS BECOME THE DOMINANT FORCE IN HUMAN SOCIETY”


“WHY RUDENESS IS SO TOXIC — AND HOW TO STOP IT”

Rudeness perpetuates rudeness. nd the act of being rude or being the recipient of rude behavior can impede productivity, emotions and overall health. No one likes being cut off, bumped into or the recipient of a terse email. Yet it happens all the time — both to us and if you think hard enough, you can probably think of something you did or said not too long ago that someone else may have seen as not so nice ...

Let your speech be always with grace, seasoned with salt, that ye may know how ye ought to answer every man.
Colossians 4:6


“HOW TO RAISE A POLITE KID, BUT NOT A DISHONEST BROWN NOSER””

Politeness matters. Knowing when to say “please,” “thank you,” “excuse me” and when not to chew with their mouth open or grab at toys. Such niceties are often overlooked, but they express empathy, understanding, and basic decency. Now, of course, no parent wants to raise a kid so polite and demure that they become a brown noser or pushover. Parents, then, must walk that thin line and raise kids who are kind and socially aware, yes, but who also have a sense of self guided by integrity. That’s no small order, says Dr. Jack Maypole, a pediatric doctor who specializes in developmental and behavioral pediatrics and who is an Educational Board Advisory Member for The Goddard School. But, with awareness, it can be done. Here’s what to know ...

Let no corrupt communication proceed out of your mouth, but that which is good to the use of edifying, that it may minister grace unto the hearers.
Ephesians 4:29