"What is indisputable is the fact that unbelief is the force that gives birth to all of our bad behavior and every moral failure. It is the root. "  Tullian Tchividjian 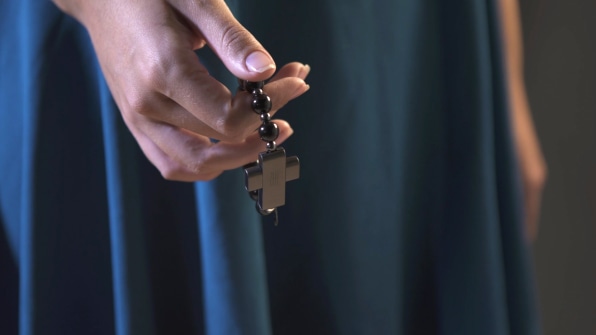 Think of it as a Fitbit for your spiritual health.

One hundred and sixty years before the advent of social media, the Pope’s Worldwide Prayer Network existed as a network of millions of Catholics from across the globe, all praying for a singular purpose.
In the modern era, it has evolved right alongside technology: Now you can literally see that network on Google Maps.

The Vatican has its own video department that streams messages from the pope himself. And an offshoot called Click to Pray literally lets you click to pray. The website lists causes that the pope has deemed a priority, and much like Facebook’s Like button, you can tap it to add your prayer to a stream. In short, the Vatican has charged full speed into the future when it comes to adopting tech.

But now, the Catholic Church is leveraging technology more than ever before by offering its first wearable. Called the eRosary, it’s kind of like a Fitbit for your spiritual health. It’s a $110 bracelet with 10 obsidian beads and a cross. The idea is the same as any other rosary: that as you recite prayers, your fingers follow along on the beads until you reach the end of the chain and know you’re done. But unlike the rosaries we’ve had for thousands of years, the eRosary was designed and developed by the technology company Acer. You begin a prayer session by making a sign of the cross. That’s when an accelerometer inside senses the movement, connects to your phone via Bluetooth, and kicks off your session, tracking your progress as you go.

If you’d like, the iOS and Android app allows you to follow along with prayers displayed on-screen via audio—it will also teach you how to use the rosary in the first place. If you’d prefer a quieter experience, it seems like the app will follow your activity invisibly, keeping track of your prayer like any fitness app would steps. (And in fact, the eRosary also tracks your steps, so it can feasibly replace any activity tracker you may wear.)

It’s worth noting that many Catholics already use digital apps in place of physical rosaries. But well beyond Catholicism, disparate faiths across the world, including Buddhism, Hinduism, and Islam, all use prayer beads to help people guide themselves in prayer.
It’s amazing to contemplate this phenomenon taking place in such different regions and cultures for millennia, as if humanity itself evolved the perfect interface for worship and reflection using nothing but a modified necklace or bracelet. Using simple beads to keep track of incantations lessens the cognitive load of prayer, and creates an experience I’d liken to meditation. (The famed psychologist Mihaly Csikszentmihalyi once explained such an experience to me as “microflow,” a sort of state of semi concentration like doodling that could allow the mind to wander and offer people a mental palate cleansing.)

It’s easy to be skeptical about any technology, let alone one being developed by a church. Yet the truth is that we live in a Wild West of wearables and wellness apps, and the power of prayer to relieve stress is already well-documented. I’d buy the eRosary tomorrow, well, if I weren’t agonistic.