Harrowing New UN Report Finds HUMANS ARE THE ‘UNEQUIVOCAL’ CAUSE OF CLIMATE CHANGE - The latest review of climate literature finds that the window to avert catastrophic warming with existing tools is rapidly closing.

A new United Nations report reaffirms what world governments have known and failed to deal with for decades: that climate change is our fault, is already causing devastation around the globe and will continue to get worse.

How much worse is entirely up to us.

The assessment from the U.N.’s Intergovernmental Panel on Climate Change (IPCC) is an up-to-date scientific understanding of planetary warming, as well as its current and future impacts. The international consortium of researchers left no room for debate over the cause of the global crisis.

“The alarm bells are deafening, and the evidence is irrefutable: Greenhouse gas emissions from fossil fuel burning and deforestation are choking our planet and putting billions of people at immediate risk,” he said in a statement.

The lengthy document — authored by 234 scientists from 66 countries and which cites more than 14,000 scientific papers — is the first major update since 2013, when the world’s leading climate science body determined that humans were the “ dominant cause ” of global warming.

The findings may come as little surprise to anyone closely following the science explaining visible shifts in weather patterns over the past two decades as seemingly biblical catastrophes have become increasingly deadly and commonplace around the world.

But the IPCC’s review illustrates the mountain of evidence showing that, without a herculean effort to rein in greenhouse gas emissions, the world is headed toward even greater calamity. Past and future emissions have already locked in changes that will prove “irreversible” over centuries to millennia, from rising sea levels and ocean acidification to melting ice sheets, it states.

IPCC authors also clearly lay out the differences between each degree of future temperature rise, stressing that every bit of warming avoided will go a long way toward limiting the frequency and severity of extreme heat, drought and weather events.

“We know that there is no going back from some changes in the climate system — however, some of these changes could be slowed and others could be stopped by limiting warming,” Ko Barrett, vice chair of the IPCC and the senior adviser for climate at NOAA’s Office of Oceanic and Atmospheric Research, said during a call with reporters. 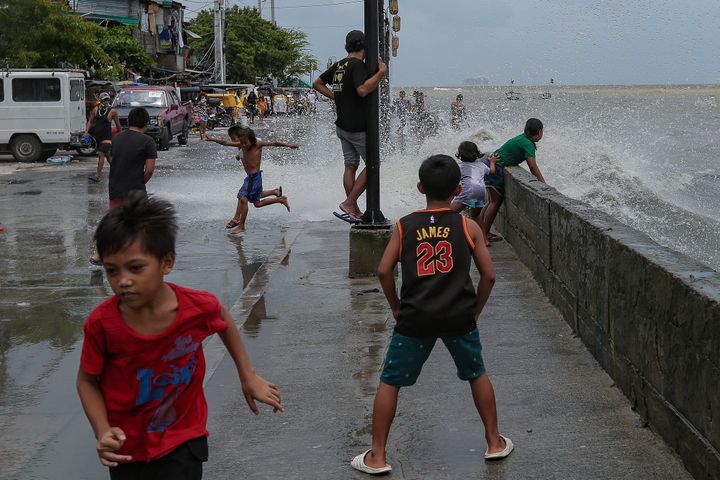 NurPhoto via Getty Images - Children play in floodwater near the shore of the polluted Manila Bay in the Tondo district of Manila City in the Philippines on July 26.

In the United States, President Joe Biden is advancing a number of policies to confront a threat that his predecessor, President Donald Trump, not only ignored but dismissed as a hoax. Ballooning emissions and decades of inaction by wealthy nations and polluting industries have rung in an era of extremes. The deadly heat wave that gripped the Pacific Northwest and Canada last month, for example, would have been ” virtually impossible ” without human-caused climate change, a recent study concluded.

The crisis is currently affecting weather in “every region across the globe,” from grueling heat waves and historic drought to more intense tropical cyclones and precipitation events, the IPCC said, a reality underscored by the deadly wildfires currently torching broad swaths of Turkey, Greece and the rest of southern Europe.

“These events are already causing great suffering and making our society less wealthy,” Andrew Dessler, a climate scientist at Texas A&M University, said in an email. “But it will be a MUCH BIGGER future problem. The impacts we’re seeing today are occurring with only 1°C (1.8°F) of warming. By the end of the century, when many of the people alive today will still be alive, we could experience 3°C (5.4°F) of warming, which will be accompanied by impacts so severe  that we’ll refer to Hurricane Harvey, the [Pacific Northwest] heatwave, and the California fires as ‘the good ‘ol days.’”

Human activity, primarily the burning of fossil fuels, has already driven the average global temperature approximately 1.1 degrees Celsius above pre-industrial levels, and concentrations of carbon dioxide in Earth’s atmosphere are the highest they’ve been at any point in at least 2 million years. The IPCC and the scientific community at large have warned that limiting planetary warming to 1.5 degrees Celsius ― the goal of the landmark Paris climate agreement ― is crucial to staving off potentially catastrophic climate impacts.

But that target may already be out of reach.

The IPCC considered five future emissions scenarios. Under all of them, global temperatures will continue to rise through at least 2050. “Global warming of 1.5°C and 2°C will be exceeded during the 21st century unless deep reductions in CO2 and other greenhouse gas emissions occur in the coming decades,” the summary states. 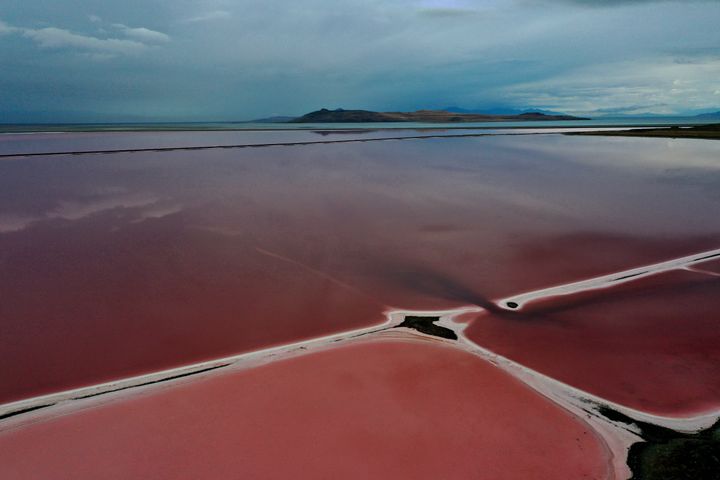 Justin Sullivan via Getty Images - In an aerial view, evaporation ponds that are pinkish-red due to high salinity levels are visible on the north section of the Great Salt Lake on Aug. 2 near Corinne, Utah, as a megadrought grips the U.S. West.

Melting permafrost in the Arctic in particular could hasten warming as carbon from dead plants and animals, built up and frozen over thousands of years, thaws and decomposes, releasing more CO2 into the atmosphere. The report warned that greenhouse gases from permafrost could generate 14 to 175 billion metric tons of carbon dioxide per 1 degree Celsius of global warming ― a potentially dramatic increase considering humans alone produced about 40 billion metric tons of CO2 in 2019 alone.

Scientific models, the report said, “project that emissions would continuously increase with warming, and that this trend could last for hundreds of years.”

This means just cutting emissions won’t be enough to balance the carbon books and avert runaway warming. Since 1958, the atmosphere has only held onto about half the carbon humans have spewed as vegetation on land and the ocean has absorbed huge portions of the pollution from fossil fuels and deforestation. Those carbon “sinks” have grown in proportion to the amount of CO2 in the atmosphere. Between 2010 and 2019, carbon sinks on land have taken up 31% of pollution while the oceans sucked up 23%, the report found.

But if humans fail to keep warming in check, the forests and peat bogs on land and algae in the ocean that sucks up carbon will suffer and prove far less effective at absorbing CO2.

The more we push the climate system from the state that it’s been in for the last several thousand years, the greater the odds that we cross thresholds that we can only poorly project. Bob Kopp, co-author of the IPCC report

“Under future high-warming scenarios, it is expected that the global ocean and land sinks will stop growing in the second half of the century as climate change increasingly affects them,” the report said. “Thus, both the total amount of CO2 emitted to the atmosphere and the responses of the natural CO2 sinks will determine what efforts are required to limit global warming to a certain level.”

In what appears to be a sign of this phenomenon already taking place, a study published last month in the journal Nature found that the Amazon rainforest, widely seen as one of the world’s most important carbon sinks, had already begun emitting more CO2 than it absorbs as historic levels of deforestation and fire devour the South American jungle.

Humans are developing ways to suck CO2 out of the sky. The concepts range in technological complexity. For example, applying crushed rock dust to croplands could pull 2 billion metric tons of CO2 from the atmosphere annually, a University of Sheffield study found last year. Machines that vacuum carbon from the atmosphere and chemically transform it into a substance that can be stored in underground caverns ― a technology known as direct air capture ― are also under development.

But the IPCC warned that such “approaches capable of large-scale removal of CO2 are still in the state of research and development or unproven at the scales of deployment necessary to achieve a net reduction in atmospheric CO2 levels.”

The reality is that we humans are playing with fire, and there is growing concern that we are fast-approaching climate “tipping points” beyond which changes become widespread and unstoppable.

“The more we push the climate system from the state that it’s been in for the last several thousand years, the greater the odds that we cross thresholds that we can only poorly project,” Bob Kopp, a report author and climate scientist at Rutgers’ Institute of Earth, Ocean & Atmospheric Sciences, told reporters.


The thief comes only to steal and kill and destroy; I came that they may have life, and have it abundantly.
John 10:10