According to box-office data compiled by a Chinese-owned tracking service, the number one movie worldwide this week is The Battle at Lake Changjin, a three-hour-long epic about Chinese forces defeating American troops in the Korean War that was partly funded by the Chinese Communist government.

Reuters on Tuesday quoted figures from Lighthouse, a box-office tracking service owned by China’s Alibaba Pictures corporation, that said The Battle at Lake Changjin raked in $779.13 million by Tuesday. The movie was released on October 1, China’s National Day holiday.

“That puts it ahead of current global blockbusters including the latest 007 film, and Marvel’s Shang-Chi and the Legend of the Ten Rings , according to IMDb-backed movie data website Box Office Mojo, and makes it the biggest-grossing war film ever, overtaking Christopher Nolan’s Dunkirk , which took in $526.9 million,” Reuters noted.

Newsweek noted that even more “conservative” box office projections see the Chinese war movie grossing over $843 million in total, which would make it the highest-grossing film of 2021, unless one of the Hollywood blockbusters awaiting release can sell an astonishing number of tickets.

The Battle at Lake Changjin was given a huge push by the Chinese government and its propaganda ministries to get its place in box-office history. The message that Chinese citizens, especially Communist Party cadres, have a patriotic duty to buy tickets has not been subtle.

Almost half of all movie screens in China are showing the film, and it was heavily touted by state media as a National Day holiday event. It was made by three of China’s top directors, who had a reported $200 million budget to work with and enjoyed the services of 70,000 extras for the battle scenes, so it was an easy product for the state to sell.

Chinese officials made certain there will be no serious competition for Chinese movie audiences until November, when big films currently showing in American and European theaters will finally be allowed to open in China.

Showings of the film were turned into exercises in patriotic fervor by the curious technique of giving audience members some frozen potatoes to chew on. This ties into a pivotal scene in the movie, where China’s determined but under-equipped troops are depicted shivering in the Korean snow and making forlorn meals out of uncooked potatoes while their American opponents enjoy a Thanksgiving feast of turkey.

“The frozen potatoes they ate give us the good life we have today!” one social media user cried in patriotic ecstasy after seeing the film, recounting how she wept at her first bite of icy spuds.

Furthermore, Beijing is offering a service to The Battle at Lake Chanjing’s producers that many Hollywood moguls would envy: arresting critics who give the film a negative review. Former journalist Luo Changping, 40, was detained and questioned two weeks ago for daring to criticize the movie and its jingoistic treatment of Chinese intervention in Korea.

Luo Changping, a Chinese businessman and former journalist, was arrested on Thursday after he questioned China’s role in the Korean War, the subject of a recent blockbuster film in the country.https://t.co/icm9PeYsEr

“Half a century later, few Chinese people have reflected on the justifiability of the war,” Luo mused. He quickly found out why nobody in China reflects on such things when he was arrested for the “crime” of “defaming political martyrs.”

Luo was apparently coerced into confessing and accepting punishment, while his social media accounts were deleted and a wave of orchestrated “grassroots outrage” erupted against him online. The message to other critics was sent loudly and clearly.

Chinese state media lashed out furiously against Western critics who dismissed The Battle at Lake Chanjing as propaganda, insisting the movie was comparable to Hollywood epics such as Saving Private Ryan – even though it is common knowledge that The Battle at Lake Changjin was literally commissioned by the Chinese Communist Party’s (CCP) propaganda department and filmed with extensive support from the Communist regime.

China’s state-run Global Times on Sunday hailed The Battle at Lake Changjin as a “successful cultural export to make the world begin to listen to the voice of China,” even though it has mostly been viewed by Chinese audiences.

It probably won’t be setting any box office records in South Korea, where irate social media users are denouncing the film as crude and insulting propaganda that rewrites the history of the Korean War, makes excuses for a protracted conflict that cost hundreds of thousands of lives, and expects audiences to applaud the birth of the horrifying tyranny in North Korea.

The Global Times touted the blockbuster success of the film as an important milestone in China’s rise and America’s decline, sneering that America is stuck with imaginary superheroes and the endless humiliating disaster of the Biden administration, while Chinese audiences embrace real heroes from their glorious history and pledge joyful allegiance to their Communist rulers:

We seem to have become accustomed to watching omnipotent superheroes flying across the big screen and accepting cultural input from the West, especially Hollywood, including the beautification of the US military.

Unlike the illusory superhero stories in the West, China’s The Battle at Lake Changjin is from real history. Our predecessors and martyrs are more remarkable and true legends compared with those heroes that only exist in movies.

The truth is more powerful than any fictional story. 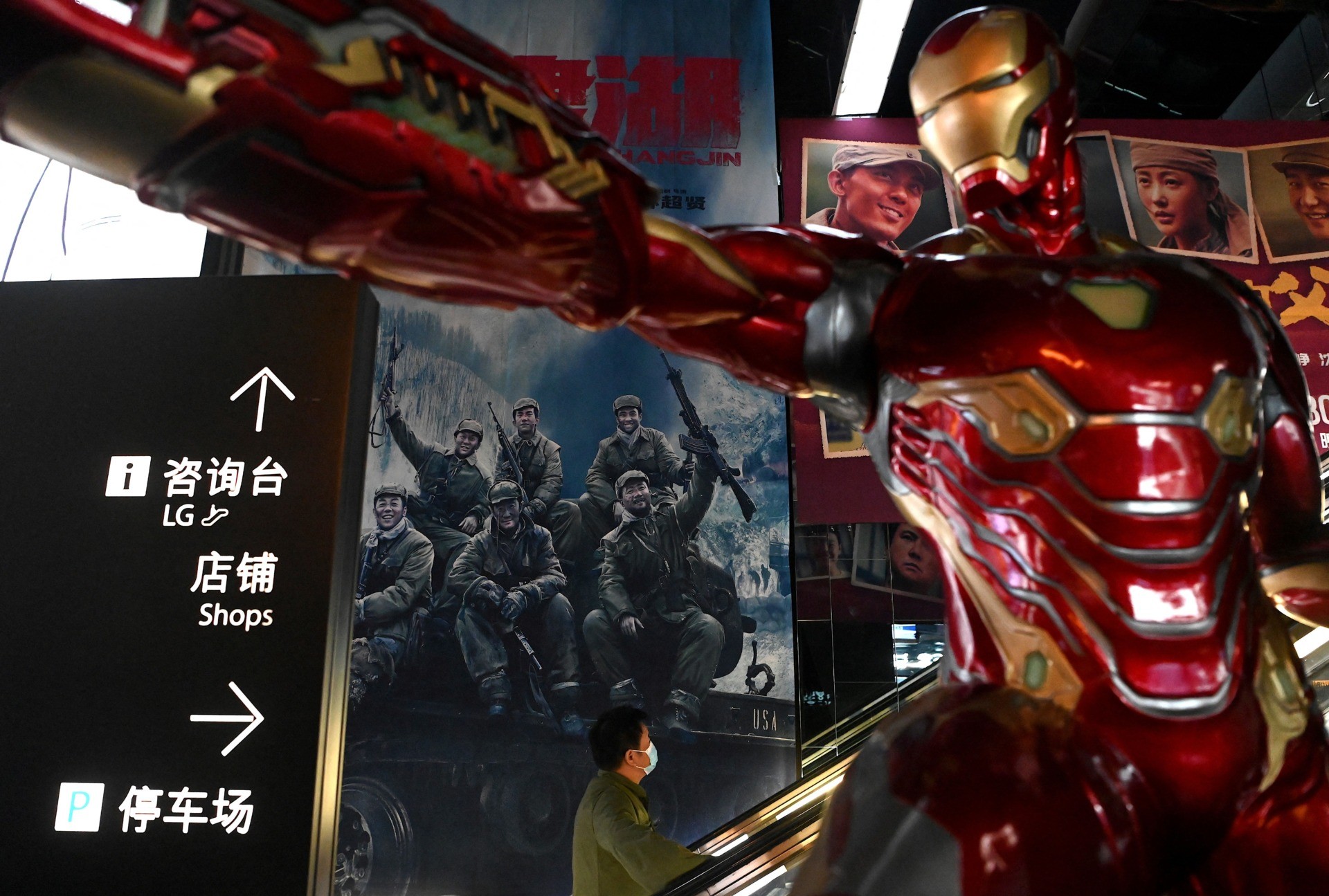 A man rides an escalator past a movie promotion poster or “The Battle of Lake Changjin” at a mall in Beijing on October 11, 2021. (Photo by NOEL CELIS/AFP via Getty Images)

A more cynical observer might wonder if the CCP is fervently trying to whip up nationalist sentiment ahead of some rough patches in President Xi Jinping’s leadership, such as the impending collapse of the Chinese real-estate industry or, more ominously, if the CCP is preparing its subjects for a shooting war in theaters such as Taiwan and the South China Sea.

Newsweek delicately noted that the battle valorized by China’s new blockbuster was “not always viewed as a success” in the past, given that China lost about 50,000 soldiers in the conflict versus 18,000 for the United States. The ideological thrust of the movie is a celebration of how China’s rigid determination turned those terrible casualties into a victory against a United States that fields excellent troops but lacks the willpower to secure victory. It is not difficult to see how the CCP might want to apply that lesson to the current U.S.-China struggle for global dominance.

It is difficult to imagine the American film industry producing a huge motion picture with comparable patriotic energy. The long-delayed Top Gun sequel has already been modified to please Chinese censors, for example.

Beyond Hollywood’s general antipathy to “jingoistic” American patriotism and its disdain for the Americans who would happily pay to see patriotic content in movie theaters, it is simply not economically feasible for U.S. studios to produce a film that would be locked out of the immense Chinese market. As The Battle at Lake Changjin illustrates, this reticence does not work both ways. China effectively has the global field to itself for big-budget movies that aggressively spread its cultural values and political agenda.

As the sneering Global Times editorial suggests, Beijing wanted The Battle at Lake Changjin to set box-office records to send Hollywood a message: In the wake of the Wuhan coronavirus pandemic, China is now the biggest movie market in the world, and it no longer needs Tinseltown’s blockbuster product.

American film producers should therefore be extremely polite and humble when offering their movies to Chinese theaters – and they had better ensure those movies include nothing that CCP censors would find unacceptable.


A man's heart deviseth his way: but the LORD directeth his steps.
Proverbs 16:9