A group of doctors researched the effect of Earth's gravitational pull on the human cardiovascular system.

Claim
A 2021 study found astronaut Scott Kelly's heart shrank by 27% over the course of roughly one year in space.

Origin
In spring 2021, news headlines claimed that American astronaut Scott Kelly’s heart shrank in mass by more than one-quarter when he spent about one year on the International Space Station in 2015 and 2016. 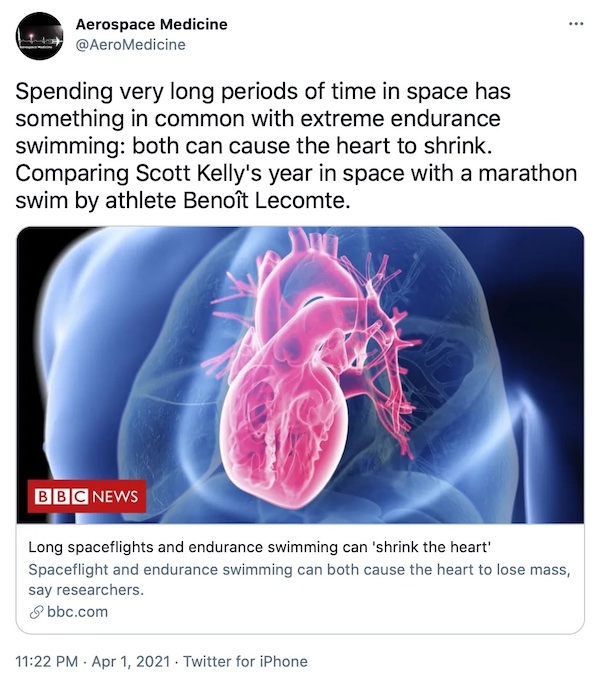 The news stories were purportedly based on a study published in the journal Circulation , a research arm of the American Heart Association (AHA) that publishes peer-reviewed research about cardiovascular health and diseases.

Using the journal’s website, we determined the research to be authentic. We obtained a copy of the study’s summary, titled “ Cardiac Effects of Repeated Weightlessness During Extreme During Swimming Compared With Spaceflight,” which was published on March 29, 2021, and explained the key findings of the research project attempting to determine the effect of Earth’s gravitational pull on the human cardiovascular system.

Led by Dr. Benjamin Levine, a professor of internal medicine at the University of Texas Southwestern Medical Center and Texas Health Presbyterian Dallas, the researchers analyzed the left ventricle (LV) of two people’s hearts: Kelly’s and that of Benoît Lecomte, a long-distance endurance swimmer who attempted to cross the Pacific Ocean in 2018. (Note: The left ventricle is the biggest and strongest of four heart chambers, pumping oxygenized blood throughout the body.)

The experiment looked at Kelly’s heart before, during, and after his space trip — he exercised almost every day in space to avoid losing muscle mass — as well as studied Lecomte’s cardiovascular system over the course of his 159-day swim. The researchers concluded:

In other words, despite both men’s physical activity, their hearts shrank at rate of about 1/40th of an ounce each week (0.72 g/wk for Lecomte and 0.74 g/wk for Kelly).

For the swimmer, that meant his left ventricle lightened from an estimated six ounces to five ounces over the course of his long swim. “I was just shocked,” Levine told The New York Times of that finding. “I really thought that his heart was going to get bigger. This was a lot of exercise that he’s doing.”

As for the astronaut, that meant for a 27% decline in mass overall, as shown via the study’s graph documenting the sizes of the two men’s left ventricle over time (displayed below). Kelly’s left ventricle went from 6.7 ounces to 4.9 ounces after the space trip, according to the experiment. 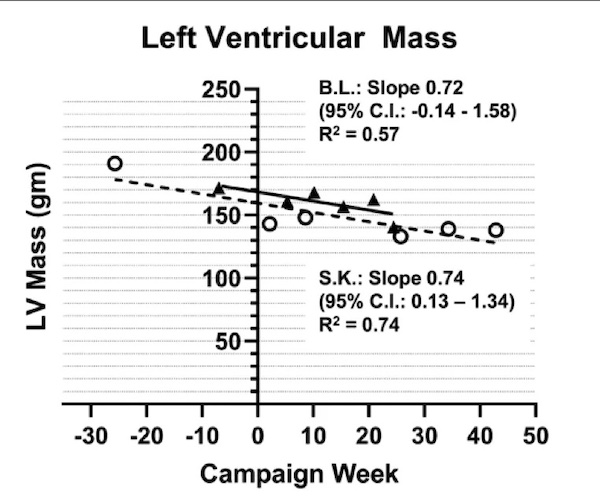 “His heart adapted to the reduced gravity,” Levine told The New York Times . “It didn’t become dysfunctional, the excess capacity didn’t get reduced to a critical level. He remained reasonably fit. His heart shrank and atrophied kind of as you’d expect from going into space.”

Considering that evidence, we rate this claim “True.”

BIO: Jessica Lee is a journalist & fact-checker from North Dakota who joined Snopes in April 2020


Oh, the depth of the riches and wisdom and knowledge of God! How unsearchable are his judgments and how inscrutable his ways!
Romans 11:33