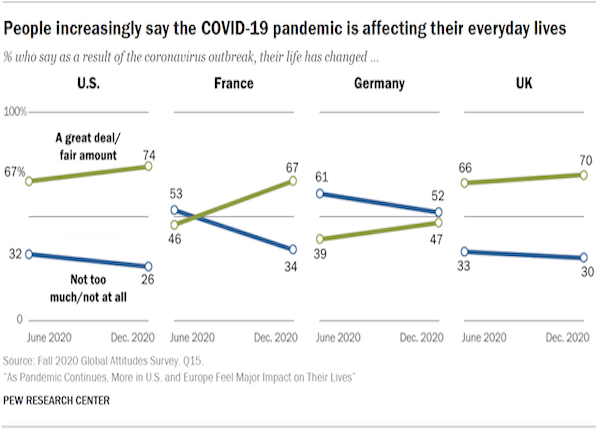 The  novel coronavirus  continues to pose weighty challenges for people around the world. Significant shares of the public in the United States, France, Germany and the United Kingdom say their lives have changed because of the outbreak, according to a new Pew Research Center survey conducted as  vaccines were first being approved for conditional use  in the UK and U.S. and   restrictions tightened in parts of Europe . And the shares who feel this way have grown notably since summer, when  the Center reported already-high levels  of impact in people’s lives.

At the same time, as  coronavirus case counts soar  in each of these four nations, publics are largely split on whether their country has done a good job handling the outbreak. Ideology plays a role in people’s assessments of their national coronavirus response, but this rings especially true in the U.S. and UK, where those on the political left are more critical. Those who feel better about their nation’s economic situation are more likely to give positive reviews of how the virus has been handled thus far.

When looking toward the future, publics in each of the four countries share in the optimism that their nations are well-prepared should there be a future global public health crisis. Feelings of hope are especially strong among those who think their country is currently handling the coronavirus outbreak well, though the U.S. is an exception.

These are among the findings of a new Pew Research Center survey conducted from Nov. 10 to Dec. 23, 2020, among 4,069 adults in the U.S., Germany, France and the UK. The survey also finds that, prior to the coronavirus vaccine rollouts in each of the four nations surveyed, many in these countries did not support government-mandated vaccinations to stop the spread of COVID-19. This is especially true among those with lower levels of trust in their government.

Most say life changed due to coronavirus, a feeling that has increased since the summer

Only in Germany do fewer than half of those surveyed say the coronavirus has changed their life, while 52% say their life has not changed much or not changed at all.

However, in three of four countries, women are significantly more likely than men to report their life having changed due to COVID-19. This divide reflects studies that have shown that  women have lost jobs  at a rate disproportionate to men, while also continuing a trend that Pew Research Center previously  observed  over the summer. The disparity is largest in the U.S., where 79% of women say their life has been affected, versus 68% of men – a difference of 11 percentage points.

Across the four nations surveyed, responses to the pandemic garner varying levels of approval. In Germany, nearly eight-in-ten say their country has done a good job handling the coronavirus outbreak. In France, more voice support for the national COVID-19 response than do not (54% vs. 46%, respectively).

In the UK, opinion is split on whether their country is doing a good or bad job of dealing with the outbreak. And a 58% majority of Americans say the U.S. is doing a bad job of handling the pandemic.

The U.S. and Germany show waning confidence in their countries’ handling of the pandemic. While 47% of Americans gave the U.S. response to COVID-19 a  positive review over the summer , just 41% hold that opinion in the current survey, a 6 percentage point drop from June to November. Over the same period, the share of Germans who say their country has done well handling COVID-19 dropped 11 points. Unlike in the U.S., however, Germans remain overwhelmingly in approval. Opinions in the UK and France stayed relatively stable.

A similar split appears in the UK, which like the U.S. had a right-leaning party in charge of national executive power at the time of the survey. In Germany, those on the left hold more favorable views of their nation’s handling of the pandemic than those on the right, though nearly three-quarters or more still believe the response has been good, regardless of ideology.

Although assessments of their country’s handling of COVID-19 vary, publics across the four nations appear hopeful about how their country would fare in future public health crises.

In Germany, about eight-in-ten say they feel generally optimistic about their country’s ability to deal with future global health emergencies. In the other three nations, at least six-in-ten hold the same opinion.

Optimism in three of the four countries relates to how people assess their nation’s handling of the coronavirus outbreak. For instance, 83% of French adults who think their country has done a good job in response to COVID-19 also voice optimism about France’s ability to deal with future global health emergencies. Just 35% who think France’s handling of the pandemic has been bad share this optimism for future situations, a 48-point difference.

This is not the case in the U.S., however, where nearly equal shares voice optimism regardless of what they think of the American response to the COVID-19 outbreak. And while Democrats (74%) are more likely to voice optimism for handling future health crises, a majority of Republicans (61%) also hold this view. (Republicans are also slightly less likely to answer this question.)

Few find it acceptable for governments to require coronavirus vaccine; UK the exception

For example, only 41% of those surveyed in the U.S. say that if a safe and effective coronavirus vaccine is developed, it is acceptable for the national government to require people to get said vaccine. Those in France are even less willing; a full three-quarters of the French say it is  unacceptable  for the national government to mandate coronavirus vaccination.

Britons, on the other hand, are more willing to allow the government to instate such a program, with 62% of those surveyed saying it is acceptable to mandate COVID-19 vaccinations. (Vaccines were at various stages of approval in these four countries during the survey period, but no government in these four countries currently plans to require mandatory vaccinations at the national level.)

In the UK, France and Germany, views on nationally mandating the coronavirus vaccine do not vary across the political spectrum. In the U.S., however, large ideological differences arise. While 60% of liberals believe it acceptable for the national government to require Americans to get vaccinated, just 28% of conservatives share that opinion, a 32-point difference.


Let your conversation be without covetousness; and be content with such things as ye have: for he hath said, I will never leave thee, nor forsake thee.
Hebrews 13:5