Researchers have successfully cloned a highly endangered ferret species using cells that were frozen more than three decades ago, according to news reports.

The adorable clone, named Elizabeth Ann, is a species of black-footed ferret , one of the most endangered mammals in North America, according to the World Wildlife Fund for Nature . Born on Dec. 10, 2020, Elizabeth Ann was created using cells from "Willa," a wild black-footed ferret who died and had her cells cryopreserved in 1988, according to a statement from the U.S. Fish and Wildlife Service (USFWS), which was involved in the cloning.

The feat marks the first time an endangered species in the U.S. has been cloned, the statement said. Researchers hope Elizabeth Ann will help bring genetic diversity to the black-footed ferret population, which today is descended from just seven individual ferrets, making all living members of the species essentially half-siblings, according to The New York Times .

The animal kingdom is a fascinating, beautiful and complex world, but it faces an uncertain future. In the past few years, we’ve seen Japan resume whaling and scientists warn that the next decade could prove pivotal for the Earth’s environment and its inhabitants. This annual explores some of the threats faced by 25 of the world’s most endangered creatures and meets the animals that owe their continued existence to the vital Endangered Species Act of 1973. 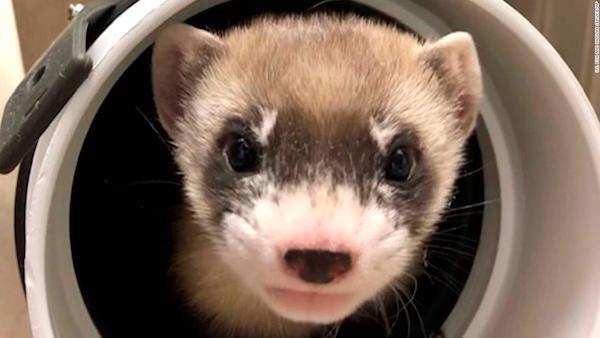 "It was a commitment to seeing this species survive that has led to the successful birth of Elizabeth Ann," Ryan Phelan, executive director of Revive & Restore, a conservation organization that was involved with the cloning, said in the statement. "To see her now thriving ushers in a new era for her species and for conservation-dependent species everywhere. She is a win for biodiversity and for genetic rescue."

Black-footed ferrets were once thought to be extinct, but scientists found a small population in 1981, which allowed conservationists to start captive breeding programs for the species. About 250 to 350 of the ferrets live in captivity, and 300 more live in reintroduction sites in the wild, according to Revive & Restore . But the limited genetic diversity of the species has challenged its recovery, making the creatures prone to health disorders and certain infections, the Times reported.

Since Willa was not one of the "seven founders" of the population, her genes — which are now possessed by Elizabeth Ann — could bring much-needed variation to the population's genetics.

The project to clone a black-footed ferret began in 2013, and was a result of a partnership between USFWS, Revive & Restore, the company ViaGen Pets & Equine, San Diego Zoo Global, and the Association of Zoos and Aquariums.

Several other endangered animals have been cloned in other parts of the world, including gaur, or wild cattle, in 2001, bucardo, or wild goats, in 2009, and wild coyotes in 2012, according to Scientific American .


Beware of practicing your righteousness before other people in order to be seen by them, for then you will have no reward from your Father who is in heaven.
Matthew 6:1