Brainwashing school students to raise a generation of atheists is a long-term weapon being viciously used by the Chinese Communist Party (CCP) to crack down on spiritual beliefs.

The regime has ruinously exploited the field of education—a potential tool that can positively transform any society—to instead propagate hatred for religions by indoctrinating students with communist ideologies and using them to further threaten and coerce their families into giving up spiritual faith.

Since coming into power in 1949, the CCP has launched several campaigns to command full control of people. The authoritarian regime is “grooming” the youth of China , from as early as kindergarten, on how to monitor and brainwash relatives with the “right ideas and thoughts” rooted in atheism, reported Bitter Winter, a magazine on religious liberty and human rights in China.

Before starting school, I told my child about God’s creation, and he believed it. But after being taught at school, my child is like a different person. In atheistic China, these pure and innocent children have been taught to hate God. — An anonymous Christian mother in China

In order to incite hatred toward religions, schools in China have implemented various state-dictated measures to threaten students that their parents and relatives would be detained if they visited church or religious places.

Bitter Winter cited one instance in which the son of a Christian parent found a leaflet about Christianity in the house. The worried child warned his mother: “My teacher says that Christianity is a Xie jiao. If you believe in it, you will leave home and not take care of me. You might set yourself on fire, too.”

“ Xie jiao ” or “heretical religions” is a term used by the CCP to attack all faiths in China that lie outside of the party’s officially sanctioned state-controlled religious organizations. The regime has opted for a misleading English translation for the term as “cult” or “evil cult” to lend legitimacy to its brutal repression of faith.

The little boy then pulled out a “Morality and Society” textbook from his bag and flipped to the pages that mentioned Xie jiao and how to resist such groups, adding that his teacher had said that Xie jiao groups are “terrible.” Influenced by what he was indoctrinated with, he urged his mother to tear up the leaflet.

The Christian mother, in hopes to not escalate tensions, hid all religious items in the house. However, a month later, the son again found a religious flyer and poked it with a fruit knife, making various holes while threatening his mom to give up her belief, stressing that “Christianity is a xie jiao” and she “mustn’t believe in it.”

Shocked by the son’s aggressive behavior, she said: “Before starting school, I told my child about God’s creation, and he believed it. But after being taught at school, my child is like a different person. In atheistic China, these pure and innocent children have been taught to hate God.”

Christianity is competing with the Communist Party for territory and people’s hearts, the work being carried out through churches and religious meeting venues. It is therefore essential that every primary and middle school, as well as kindergartens, expanded ideological work on young people to improve their political standing.

According to a report , Chinese leader Xi Jinping is “forcefully promoting patriotic education” to indoctrinate the youth with the communist ideologies. When he visited a primary school in Chenzhou City in the central province of Hunan on Sept. 16, 2020, he stressed ingraining the “red gene” in students and to “pass down the revolutionary cause from generation to generation.”

The Heze City official reasoned that children are “naive” without any thoughts of their own. Therefore they must be “taught to love the Party” at an early age. “If they are educated this way, they will be able to serve the country when they grow up,” the official said .

In one instance, the report said a primary school in Shandong’s Jinan City asked parents to make their children commit the core socialist values to memory; the parents complained that their kids were so stressed memorizing the “dogmas” that they cried out of frustration.

On Sept. 1, 2020, during the first patriotic education class of the new school year, primary school students in the northeastern province of Heilongjiang saw a bold slogan on the blackboard: “Let’s hold high the flag of Young Pioneers, follow the Party, and prepare ourselves to fight for the Communist cause at all times.” Additionally, there were some other electronic displays near the blackboard that promoted similar patriotic slogans, the report said. 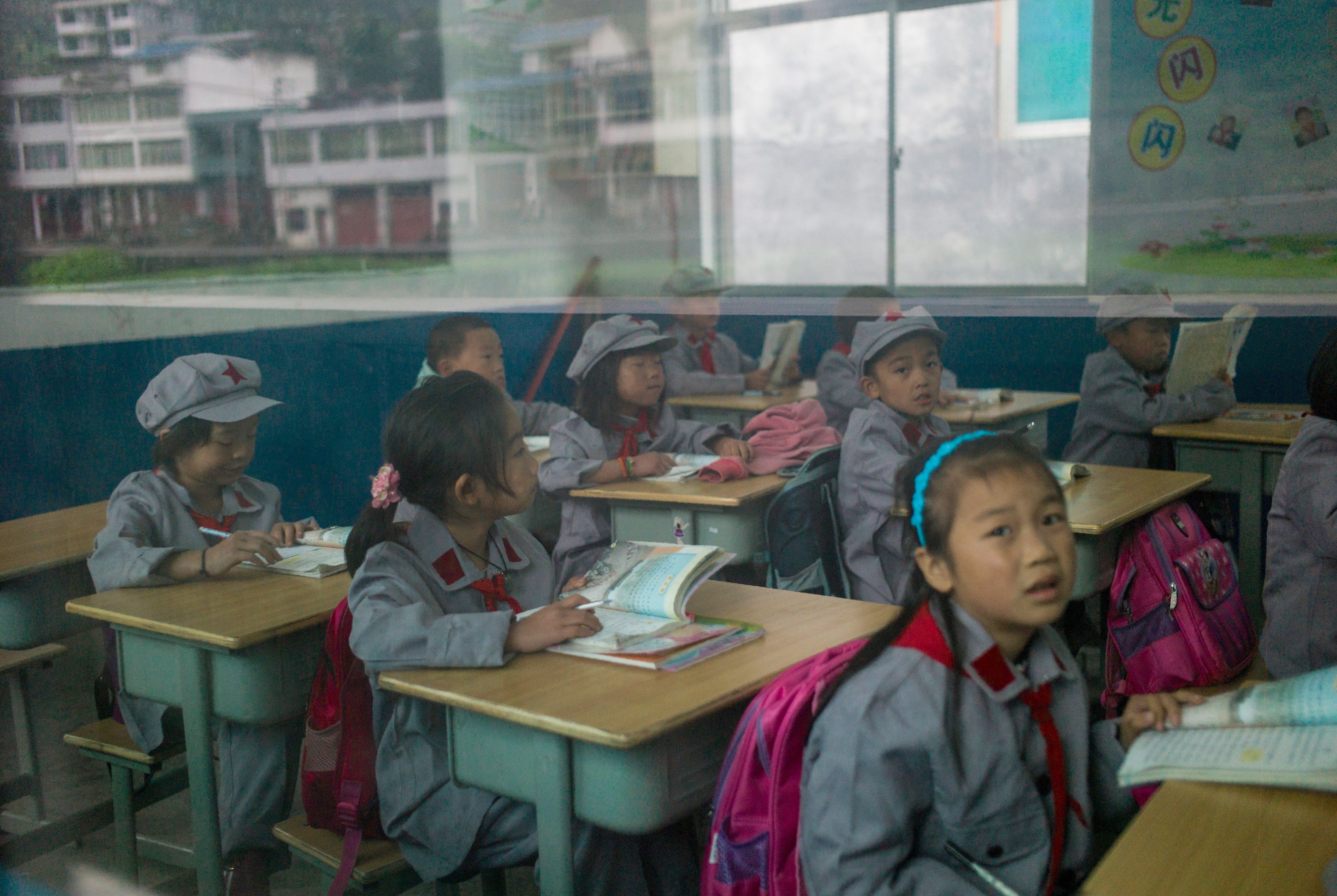 
Children are also forced by the schools to report on their parents who follow a particular faith, and in some cases, these children have also been expelled from school if someone in their family is found to be a spiritual believer.

For instance, on Sept. 6, 2020, the 4-year-old grandson of a retired teacher who taught at Macheng City Kindergarten, in Hubei Province, was banned from attending the school even after the family paid the full fees upfront. The reason for his expulsion was that his mother and grandmother were Falun Gong adherents who refused to renounce their faith, reported Minghui, a U.S.-based website that carries firsthand reports about the persecution of Falun Gong in China.

Falun Gong, also called Falun Dafa, is a spiritual self-cultivation practice based on the principles of truthfulness, compassion, and tolerance. Fearing its universal spiritual teachings, former CCP leader Jiang Zemin viewed the peaceful practice as a threat to the communist ideologies of materialism, atheism, and Marxism. He then launched a brutal campaign against Falun Gong in 1999. This has resulted in tens of thousands of adherents being jailed, tortured, and even subjected to forced organ harvesting .

Pledging to ‘Stay Away From Religion’

Meanwhile, while inspecting schools in 2019, the communist authorities “identified problems” in the way staff members were handling the ideological issues related to religions, and thereafter, a notice was issued in March the same year by the Education and Sports Bureau of Yugan County, according to a Bitter Winter report .

The notice stated that “Christianity is competing with the Communist Party for territory and people’s hearts, the work being carried out through churches and religious meeting venues. It is therefore essential that every primary and middle school, as well as kindergartens, expanded ideological work on young people to improve their political standing,” according to the report.

The students of a primary school in Jinzhong City, Shanxi Province, were warned by the principal that “the United States and other countries are using religion to influence Chinese people’s thinking,” and cautioned them to “remain vigilant,” according to another 2019 report by Bitter Winter. 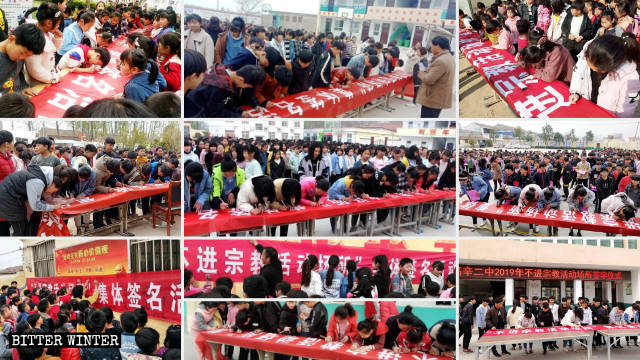 Students at primary and secondary schools in Gaoxin town sign their names on banners pledging not to enter any religious venues. (Courtesy of Bitter Winter

In the month of April that year, primary and secondary schools held campaigns to sign banners and pledge to “stay away from religion” after receiving orders from the Suiyang District Education and Sports Bureau in Shangqiu City, in Henan Province. Similar events followed in different parts of China, involving both school students and kindergarten children to partake in the affair.

In one secondary school, a principal required that students and teachers attended an “ideological meeting” to prohibit them from believing in any religion while making them sign their names on propaganda banners. In an attempt to instill more fear, the students were threatened that they would be expelled if they were found to believe in God, the report said.

Huge banners with messages to “resist religions entering school campuses” have been displayed prominently outside kindergartens and schools, forcing innocent children to become puppets of the CCP. 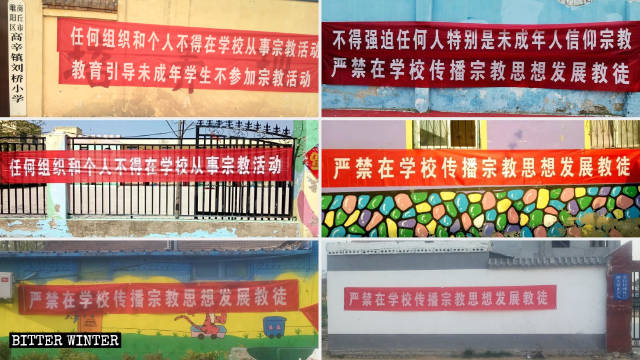 Banners with messages calling to resist religion were displayed at the campus walls of primary and secondary schools of Suiyang District, China. Courtesy of Bitter Winter

An anonymous kindergarten teacher told Bitter Winter, “Children believe their teacher the most, so the government is making us indoctrinate them with these ideas.”

“It is clearly to make children reject faith from an early age,” the teacher added. “They are still young and don’t understand everything. I don’t want to do this, but I have no choice: to meet the government’s requirements, I have to go through these formalities.”

Arshdeep Sarao contributed to this report.


The blessing of the Lord makes rich, and he adds no sorrow with it.
Proverbs 10:22